The Croatian artist is a former solider who served during the War between 1991-1995.

After independence, he turned to art which he uses to express a longing for the past when life was simpler.

He paints and sculpts with reclaimed wood in a style that he says evokes a sense of everyday Dalmatia.

This it seems was when men wore their moustaches long were and women had big busts. His favourite motifs include sailors, grannies, dogs, seagulls and fishermen.

There are also characters with “electric heads” and with butterflies in their stomachs, which Mikulic says represents the moment people fall in love.

His flat is a gallery of his own work created over the last 10 years.

It fills his kitchen, artwork decorates the walls in the living room and what doesn’t fit, sits on the floor.

Mikulic began as a cartoonist and draws with his left hand because he says he doesn’t want his art to be perfect – he even writes his signature backwards.

As he stands in his kitchen pouring wine and telling jokes in his broken English, it’s difficult to imagine Mikulic as a major on the battlefield.

He said: “My work is free from politics and social issue themes. This is the genuine spirt of Dalmatia – it’s a nostalgia for Croatia long before it became Yugoslavia.” 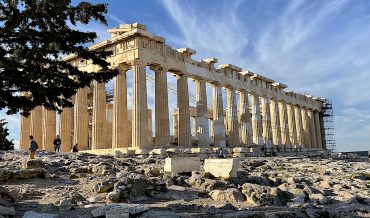 Tips from the top of the Acropolis
LIKE A Greek myth, the city of Athens draws you in. It’s the oldest capital in Europe and the birthplace of democracy.
Login