If you think summer holidays are best on the Mediterranean, think again. Natalie heads to the bluest Black Sea resort!

AHHH, I know it so well. The blue sea, the hot sun and the golden beaches. But this isn’t the Med, I’ve come to Varna on the Black Sea coast. It’s every bit the beautiful beach holiday that you’d find on the Côte d’Azur or on the Costa del Sol – they even use merci as thank you and chau as goodbye.

This is not what I’d expected from a summer holiday in Bulgaria. Known as country’s summer capital, I’m glad when I see the Black Sea is actually sparkling blue.

I hadn’t heard of Varna before but with its Greek, Roman and Turkish heritage, I find out it’s one of the oldest European cities. On arrival it feels instantly familiar.

The bus from the airport drops me outside the Cathedral, in the heart of the city. It’s then a 15minute stroll down towards the seafront and my apartment. Having booked an Airbnb, I have two hours before check in at 3pm.

It’s lunchtime and people are relaxed sitting in fancy open-air cafes sipping Aperol spritz and eating pizza. It’s only right I join in so I find an orange and white striped restaurant with swing. I take a seat out on the pavement under the white umbrellas trimmed with lace.

I order a glass of Bulgarian wine, which comes served on a bucket of ice. I take a sip to unwind and quickly decide the plan is to spend the weekend doing much the same.

At just over a three-hour direct flight from Luton Airport, the city looks set to be the new must-see seaside city break destination.

Varna is a pretty, tidy and leafy seaside port with a huge landscaped park and at least a mile-long seafront packed with glamorous bars, restaurants and clubs.

But what also sets this city apart is its impressive medieval history and roman ruins. Named Odessus, it was settled by Thracians in the 6th century BC and used as a trading post.

Having lost an hour with the wine and a guide book, I wind my way down the shop-filled avenue that slows me down further.

The top buy in Bulgaria is any product made from rose oil. This country is the world’s number one producer of the fragment “rose otto”. They say that one kilo is worth three times that of gold.

Yet while they sell much of it to the big brand cosmetic and perfume companies, they also have their own Bulgarian range, without the hefty price tag.

I stock up on rose oil to take home!

So, after many hundreds of floral pumps and aromatic sprays later, I have three bottles of rose water and vow to bulk buy creams and lotions for life before I leave.

Another ritual here seems to be eating ice cream so I stop for a mint chocolate scoop and cone before I walk on. I’ve picked an apartment next to the Festival and Cultural Centre with a balcony that overlooks the main street Boulevard Slivnitsa.

This turns out to be the right location. I’m in the centre of everything. I can hear the bustle from the bars downstairs and even a pianist tinkling in the Sea Garden park.

From up here, the city centre shows little sign of its Communist era past or the concrete blocks that I expected. I use my spray to give me that summer glow and head out to my final pitstop at the beach.

There are sofas, mattresses and brightly painted wooden arm chairs down on the sand. I take a beanbag and order a beer. To hell with it! I order a cocktail instead like the locals and start practising my merci as blagodaria is too hard to pronounce.

Despite being a sunbathers paradise, Varna beach isn’t packed with holiday hoi polloi. They’re hidden away in the nearby resorts of Sunny Beach, Golden Sands and Sunny Day on two-week packaged holidays.

The social scene in the city centre is mostly outside dining with dozens of restaurants concentrated on the seafront. By 9pm the city’s as it’s best as the sunsets late and the restaurants fill up.

Having whet my appetite, I stay for dinner eating a simple Bulgarian shopska salad.

The next morning and I’m ready to explore. It’s quiet at 9am when I walk the length of the Sea Garden – said to be the biggest landscaped park in the Balkans.

This has been the city’s pièce de résistance since the late 19th century when it started as a small Ottoman garden.

Thanks to my rose elixir, I make it all the way to Varna port for ice cream and a cocktail to cool me down.

I then turn away from the sea and head towards the Roman baths. I poke my head around the ancient stone slabs where centuries ago people washed in warm springs. These are the fourth largest ruins in Europe, built in the second century.

It’s a great insight into the roads they built and surprisingly the two shopping areas, which would have been right up my street.

Not as relaxing though as it once was though, the baths are now covered with high weeds and tiny flies, so when I start scratching my legs I know it’s time to leave.

I spend two more days exploring the city then give myself the afternoon off to relax down at the beach.

On the last day, I stock up on rose oil potions to take home.

Whenever Bulgaria makes a top-10 holiday list it is normally for good value. With the pound worth double the lev, it’s makes this city an unbeatable deal.

Varna offers two holidays for the price of one: a city-break packed with history and culture and a great family-friendly beach resort. 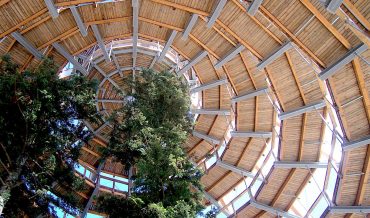 Tiptoe through the tree tops on the Bavarian Glass Road
FROM the summit of the world’s longest Treetop Trail, I can hear the gentle rustle of leaves from inside the Bavarian Forest.
Login