I’ll have the sea spaghetti followed by the seaweed tartare, s’il vous plaît. Then the sardines with just a sprinkle of fleur del sel.

And for dessert? The dark chocolate sea lettuce, of course.

This is superfood French gastronomy. A few days like this on the wild west Atlantic coast and your body will be purring like a kitten.

Yes this isFrance – the Loire-Atlantique where I’m travelling across two regions filled with port towns from Le Croisic in Brittany down to Saint Gilles in the Vendee. It has a rugged coastline, fishing huts that hang off cliffs, miles of cycling trails and wide sandy beaches.

For food, there’s everything you’d expect from French cuisine – with cheese, plenty of good wine (top tip: don’t miss the Crémant!!) and Michelin-starred restaurants. But it also has its own specialities too that come freshly plunked straight from the sea: seaweed, salt and sardines!

The starting point is Nantes, just a short hop – 1hr – from the UK. Here’s some inspiration of where to go, what to do and what to eat and drink.

Ever tried seaweed? Well, at Les Jardins de la Mer, husband and wife Jean Marie and Valerie Pedron will catch you up on everything you’ve been missing. For starters they’ll tell you that seaweed contains 10-times as much vitamin C as oranges and is also high in protein. Then they’ll give you some wellies and take you foraging for red, brown and green seaweed before cooking you up a dinner of cockles and sea spaghetti at their marine farm. Bon appetite!

This quiet harbour town has been making the famous Curé Nantais since 1880. The cheese factory is the oldest in the region and you can have a tasting for just €1. The milk comes from just six miles away (10km) and it’s all made by hand. You can even join a tour where you’ll watch the whole process from the fresh milk getting poured into the copper tanks to the curdling and the moulding. And the result? Soft, yellow chucks of fromage – some strong and whiffy. Best served in a large baguette and loadsa butter, I reckon. Delicious!

Simply put St Gilles (for short) is the best of France in a seaside town. The streets are filled with haute cuisine and fine wine. In the harbour area, you can join the queue at Le Banc des Sardines to taste their famous grilled fish that’s come straight off the early morning fishing boats.

Houses are typical of those built at the end of 19th century and beginning of the 20th century when tourism also began. It has lots of small beaches, miles of cycle routes along the coastline and if you’re on foot, you can walk half-an-hour to the village of Saint Hilaire de Riez, which has one of the longest shorelines along the Atlantic coast. It’s about 7.5 miles long (12km).

Next up is sea hiking? Wait, what?

Really this is only ocean walking. In French it’s called longe-côte, which translates to coast walking, but in English it’s been coined as sea hiking or sometimes you’ll find it as water walking or even water wading. All it is, is walking in the sea. It’s great for burning calories, it’s gentle on the joints and the drag from the water strengthens your muscles, trims your thighs and tightens your bum. What’s not to like? You don’t even have to get your hair wet as you only go in to about chest height – and in a flat calm sea, it’s a walk in the park.

I joined a group down on the sandy Grande Plage that stretches for almost two miles. Led by surf instructor Chloé Brelet, the classes start late in the afternoon – to avoid the heat of the day – and last about an hour. The vibe is friendly with women of all ages, shapes and fitness levels. After the sea hiking, she serves tea in fine bone china.

Now for a bike ride around the salt marshes

Thank god for salt because it makes all food taste…well, tasty. The salt marshes in Saint Hilaire de Riez are the legacy from Benedict monks in 7th century. Today, the once painter and decorator Anthony Oger is the only salt maker in the area. Hundreds of years ago this salt was used to preserve fish but now it’s a très high grade product known as “white gold”. This is because Anthony harvests only the crust of the sea salt. This is called Fleur de sel. It’s not the type of salt you’d bung into the pot. This stuff is used to finish a dish before service in top notch restaurants for hard to please chefs. It’s grainy so you might find it sprinkled on top of a juicy steak or on a chocolate dessert. It’s highly prized and costs way more than your regular table salt. Underneath the Fleur de sel is the next grade of salt, which is gris (grey) and this can be used for cooking.

Need a glass of wine?

Easy, plus you can get a horse-and-carriage ride while you are it. This is the experience at the vineyards at Eric Sage to get across their 90,000 vines. This estate has being converted to produce organic wine. The goal has been to find a balance of life between the crop and the wildlife. They make around 35,000 bottles a year. After a gentle trot, comes the drinking where you’ll be presented with glasses of white, rosé and red grape juice.

Being close to the sea means the wines are slightly dry. The rosés are dark in colour rather than blush. I get raspberries, strawberries and cream. Yep, I think that’s my favourite…for now! You can get totally get carried away here because it’s all totally natural. Right?

Where to stay: In a Michelin-starred restaurant!

I stayed at Les Brisants, not least for it’s continental basket of baguettes and fluffy croissants at breakfast but because this turns into a Michelin-starred restaurant. So the rule is that in the evening you can dress up and enjoy the culinary creations of chef Jean-Marc Pérochon.

And while the food and restaurant are very fancy, the hotel has less razzle-dazzle and comes at a more down to earth price. It’s located on the seafront so I sit staring out to sea while eating bread. This is the life and these are the flavours of the Atlantic-Loire Valley. It’s just how you’d imagine. C’est magnifique! 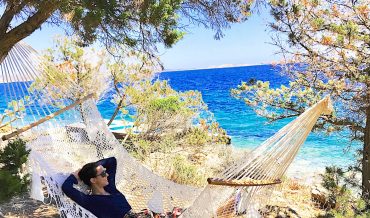 Slow down in Sardinia
SOMETIMES you just need to sit down and do nothing for just a little while. That's what Sardinia is for.
Login