Where Lisbon’s foodies come to dine

TABERNA da Rua Das Flores Lisbon’s city secret. From the outside, it looks like a plain Portuguese restaurant and even on the inside the chequered floor and the marble tables seem unimpressive.

Not everything is as it seems though, the food is extraordinary.

That’s why this tiny kitchen is attracting 150 people a night – even though there are just nine tables that can seat up to 20 people – people queue outside for up to two hours to get in.

This is gourmet grub at great prices.

We have a queue of people outside – up to two hours!

Located just off the square Largo do Chiado in the busy Chiado neighbourhood, it’s become one of the busiest restaurants in the city.

They seat people on a first come first served basis. They take no bookings and just one minute after it opens on a Saturday evening, the place is filled.

In the back near the kitchen are some of the best seats in the house known as the Roman spot. Here customers sit on steps covered in cushions and the food is served on top wooden boxes.

Owners Barbara Matos and chef Andre Magalhaes believe in investing in their team and in using the best ingredients – even the olive oil is homemade. Barbara began waiting tables aged 15 and opened up her first restaurant at 24 in Porto.

Reluctant to start this restaurant in Lisbon three years ago, she spoke to Natalie to explain its spectacular success.

She said: “We started penniless and we focused on the food. We buy very good food – fresh fish and bread every day. We buy today, we see what we get and make the menu. That’s an important thing here.

“There’s also a big investment in the team. We are all about the food and the welcome. It’s the simplest of formulas. We like what we do. Sometimes people open restaurants and want to make a profit. But this isn’t a sprint it’s a marathon.

“We like the people and we like the food. Andre my partner is a food encyclopaedia and a big traveller. He is a professor of gastro sciences from Portugal and everywhere he is mixing food with a deep knowledge of what he’s doing.

“Chefs can lose touch with people. It’s become like they are a god but Andre doesn’t have this. He has a warm heart. He’s sharing and he’s very generous.

“We won a national level award for the best price and quality. So we make it good for everyone. We’re not here to be rich. It’s good for people who dine, who work here and the suppliers. You come here to dine, you get good service and good food for a good price.

“In the end we have a queue of people outside – up to two hours.”

“We do lunch Monday to Friday which is more traditional. And then from 4pm we make petiscos (small plates) which are more creative. On Saturdays we open at 6 o’clock. On Sundays we’re closed. It’s a tavern. We are full very early and we say to people it’s an-hour-and-a-half wait. They go for a drink and they return later.

And if you’re in Lisbon, it is somewhere you must go. 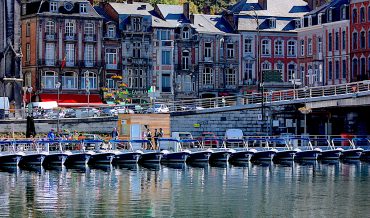