Nibbling in Bologna, a city of bite-sized delights

MAMMA Mia. Pull up a stool, dangle your legs and get stuck into the bar snacks.

But first a drink. It’s not wrong to start a weekend break in Italy sipping a glass of Prosecco as this nation of original thinkers invented the aperitif or the pre-dinner drink.

It’s also the perfect excuse to revisit the Italian classics such as the ready to drink Campari, Cinzano, the bright orange Aperol and even a sparkling Lambrusco to get the evening started.

I checked into the pretty Al Cappello Rosso hotel, just a few steps away from the main square Piazza Maggiore, before heading out to the nearby bars. Choose anywhere around the bronzed statue of the god Neptune in the heart of Bologna.

Then once refreshed, the best it yet to come – the food. It’s all free.

The philosophy behind the aperitivo is that it’s an opener to a meal – to help you slip into a lighter mood before going on to a restaurant.

All I had to do was buy the drink, which can cost as little as 5euros (£4), and the finger feast was complimentary.

On the bar showing off were plates of prosciutto ham, green olives, small sandwiches, bread sticks, dips and pecorino cheese.

It’s the same in all the bars. There’s not even the merest raised eyebrow if you fill up a plate and then go back for more. Bellissima aperitivo.

Bologna is the capital of the Emilia-Romagna region in the north of Italy.

There are huge red brick palaces, two leaning towers, eight churches and miles of porticos, which are pavements with wooden or stone arches as covers – great for when it rains.

The 1,000-year-old city is known affectionately as the red, fat, learned one. The three nicknames account for the biscuit-coloured architecture, its meaty food and for having the oldest university in the world.

But for me the big symbol of the city was the giant statue Neptune with the spectacular story of his manhood.

History states that 500 years ago sculptor Giambologna had wanted to make the crucial part of his anatomy big enough for the size of the figure but the Church was against that idea, wanting it to appear smaller.

So instead the defiant artist placed the left hand down by the groin so when seen from the side, the thumb looks like an erect penis.

Who knew history could be so entertaining?

Next to this masterpiece in Piazza Nettune is the main square where there stands the domineering Basilica of San Petronio – one of largest churches in Christendom.

On the other sides are shops, bars and cafes with waiters serving tiny cups of espresso on outside tables. Don’t ask for anything milky after noon, as Italians don’t go in for lattes or cappuccinos after breakfast.

They even think people who drink tea must be ill.

Groups of grey haired men hold court in another corner. Students in sunglasses sunbathe on the cobbled concrete and school groups shuffle around learning about their rich history.

As I strolled around this medieval scenery diving into cafes for black coffees I felt like I was in a mighty museum where much of what is familiar to us began.

Food wise, this is the home of that mythological dish spaghetti Bolognese. Although the sauce is actually called ragu and it comes served with the ribbon-like pasta tagliatelle.

You can find it in many of the restaurants, you can almost smell it in the air.

I sat in Cantina Bentivoglio mulling over the menu but when I looked over to the other tables and saw everyone tucking into the ragu, it was the natural choice.

Within 10 minutes of the food arriving, it went. I wanted to order another one.

And for a dish so ancient, the ingredients seem so humble with just beef, celery, carrots, passata and red wine which take between one to six hours to cook down.

Perhaps it tastes so great because it comes after a customary couple of spritzers and perhaps a plate of Mortadella – the cold cured pork sausage, which is a staple in Bologna.

There can only be good meals to be had in this part of the world as it was also the birthplace of lasagne. Buca Manzoni – just down the road from Neptune’s monument is the best place for this well-established favourite.

And don’t leave there without a time-honoured digestif after the meal. The post-dinner drinks aren’t to be out done by the aperitif so order a Grappa, Limoncello, or Nocino, a regional walnut liquor.

The neighbouring town of Modena also has a legacy of its own as the capital of engines.

For just over £10 you can spend an afternoon in the Ferrari museum learning among other things that founder Enzo Ferrari wore his dark sunglasses in memory of his son who died aged 24 from muscular dystrophy.

This city was also where opera legend Luciano Pavarotti was born and today the theatre now named after him holds concerts throughout the year.

What impressed me the most though was ice cream topped with dark, rich and handsome balsamic.

To be the genuine article the vinegar has to be aged for at least 12 years. But whoever thought of adding it as a topping to Gelato was a genius.

And gave us the perfect way to end our banquet. 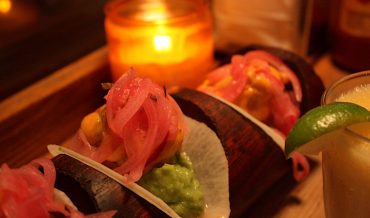 The world on a plate in Soho
WHAT if you had just one night in London and you didn’t want to waste time? That’s where Eating London Tours comes in.