DRUMMER Hans Menacho plays with Zen, Peru’s biggest pop-rock group, who pack out the national stadiums and music venues across the country.

Their songs get millions of hits on YouTube with Quédate (Stay) one of their anthems.

Hans also plays with Mauser, The Big Pink and at times with metal band Masacre and rock band Emergency Blanket.

I caught up with the muscian to ask where the bands hang out and the top night spots for live music in Lima.

Where does Zen hang out?

“Most of the time in La Noche. It’s open everyday, the drinks are good and they stay open late.

It’s where all the bands play. I first went there 20 years ago and now I play there. It has two rooms, one with the gig and another where the bar is. Zen started playing there in 2000 and I started playing with them in 2013.

We play there about three times a year. I have also played there with the Big Pink.

They have music every night of the year and when everything else closes at 3am they stay open until 4 or 5am. It’s cheap and the Pisco sours are good.”

“Un Dia Mas from the first album – but I’ve played it only twice with the band.”

What about live salsa music?

“Sargento Pimienta: This is in Barranco too and around 10mins from La Noche.

It’s a famous place in Lima as all bands have played there. It’s a bigger venue than La Noche so they have bigger gigs. It’s open Tuesdays with a live salsa band.

Then on Thursday and Friday they have live bands and Saturday it’s more laid back with a DJ.

“El Dragon de Barranco: This too is in Barranco. It’s a five minute walk from Sargento. It’s small. The drinks are good. I’ve never played there with Zen but I have with Emergency Blanket.”

What about acoustic music?

“Garrison Bar & Beer Garden: This is a bar in Barranco close to La Noche. It’s a small place for acoustic acts. It’s more rock music and only opened last year (2018).

It’s modern. The drinks are great. I like the gin and tonic. They do them smoked and they burn cinnamon on top.”

“Barbariana: It’s a tiny bar, on Larco. I like the music. The atmosphere is good. I like the beer but I don’t get to go often. The food is good too with burgers, fries and chicken wings.” 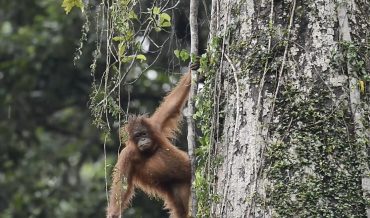 Go ape when you see the orangutans in Sabah
AS THE banned Iceland advert has us hooked on orangutans this Christmas, where can you still see these amazing animals?
Login